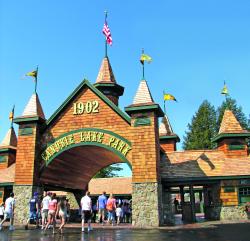 From the late 1800s to the early 1900s, trolley cars were growing and expanding all over the country creating new and exciting ways for people to travel. In 1902, Salem, NH was silent as the first trolley car bell rang from the distance signaling that times were about to change. Salem’s role quickly grew by being in the center of the Greater Lowell, Lawrence, Haverhill, and Nashua communities.

Less than eight weeks after the introduction of the new trolley lines, The Hudson, Pelham & Salem Railways (HP&S) opened Canobie Lake Park as a pleasure resort to increase the excitement of their business. Its botanical garden atmosphere inspired visitors to dress up in their finest clothing to enjoy a day of leisure with their family and participate in attractions, which at that time were limited to: canoeing, sporting events, the Circle Swing, picnics, and the Penny Arcade.

By 1912, the HP&S Railways, along with other smaller companies, merged to form the Massachusetts Northeast Street Railway Company, MNRC, dubbing Salem as the hub of the Company’s trolley operations and infrastructure.

The 1920’s were difficult years for the MNRC. Business was collapsing under the weight of the tiny automobile. By 1923, the company found itself before the NH Public Service Commission requesting to abandon their line to Pelham, Dracut and Nashua. There was now an automobile in the driveway of all but eight homes served by the Pelham Line and daily trolley revenues for two weeks in January had averaged only $24.87. Wages, maintenance, and schedules were cut back on all lines as ridership continued to drop, which angered the public and hastened the company’s demise. The town of Salem, NH declined to act on an option to help keep the Salem lines in operation and on Sunday, March 17, 1929, the last electric car rolled out of town and Canobie Lake Park went out of business shortly thereafter.

In 1932 a private citizen who had made millions from an “electric paving machine”, purchased Canobie Lake Park and had a team spend seven weeks to get the Park back into shape for a spring opening. He negotiated the purchase, transport, and construction of the Greyhound Roller Coaster (today known as the Yankee Cannonball) from Lakeview Park in Waterbury, Connecticut in 1936.

In 1943, the owner passed away leaving Canobie Lake Park to his wife and son. They continued to operate the Park until 1957 when a fire, a robbery, a hurricane, and the decline of the Big-Band Era proved to be too overwhelming.

At a time when the more than 2,000 roller coasters in the United States had dwindled down to about 200, three close friends from New Jersey purchased the Park in March of 1958. Under this new ownership, Canobie Lake Park began to grow. With a small staff, the owners themselves began to renovate the Park, including pouring the hot top to create the paved midway you see today. They introduced new rides, games, and concessionaires and gave Canobie Lake Park the leading edge to still maintain, over 100 years later…New England’s Best Family Value!